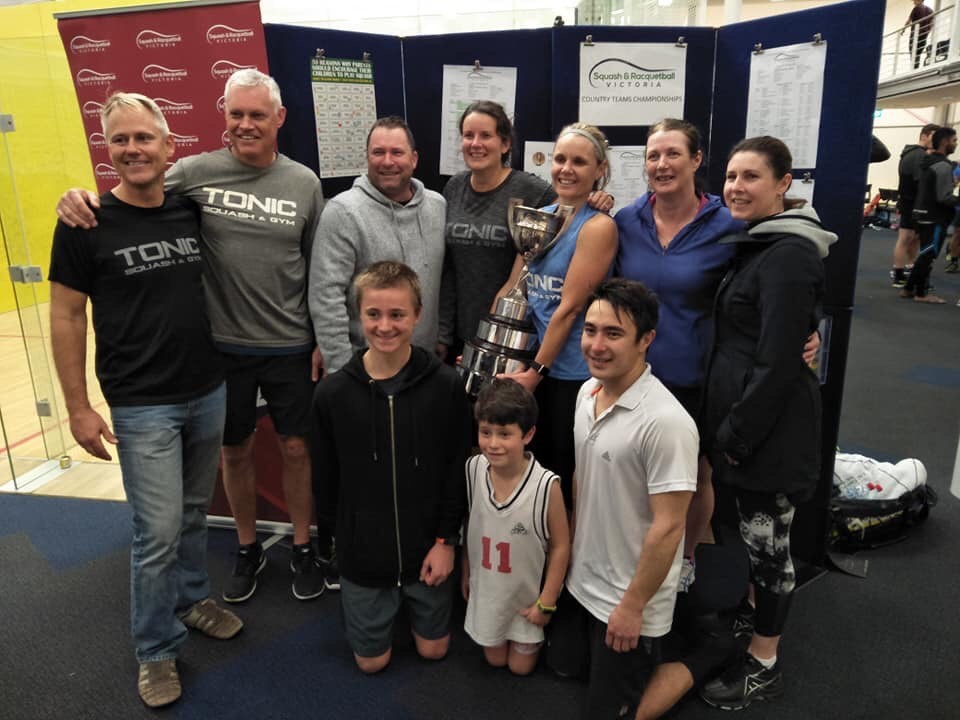 With upwards of 120 players competing over the weekend at MSAC it was another highly successful championship, with Mornington Peninsula crowned the Victoria Country Teams Champion after winning both the Hopman Cup and the Royal Trophy.

Division One saw some great squash involving the power house districts of Mornington Peninsula and Geelong, along with the returning champions, East Gippsland. Geelong and Mornington certainly brought in the big guns this year with Cameron White and Mary Sceney leading the way for Geelong, and Rod and Amelia Martin strutting their stuff for Mornington. After Saturday’s matches it was clear that Mornington and Geelong were the teams to beat with both teams having had two wins apiece.

Sunday’s clash between these teams was tight and befitting a grand final as the result came down to the last match. Mornington held on against a fast finishing Geelong to eventually come away with a two game win over their rivals. This win proved to be the pivotal moment of the weekend, giving Mornington the upper hand in their endeavours to win the Hopman Cup.

Although Mornington still had work to do with one game left, a swift defeat of Ballarat secured them their 3rd Hopman Cup win in four years. Geelong were close but unfortunately had to settle with 2nd place while last year’s winners East Gippsland were the best of the rest with a very respectable 3rd place.

Bendigo comfortably won Division 2, making a clean sweep of all their games. Warrambool showed promising signs throughout the week, and along with Bendigo who are showing growth depth and standard, will be put to the test when they return to the Hopman Cup next year.

Mornington Peninsula made sure it was a great weekend for them when their second team won Division 3. They were pushed to their limits by Sunraysia who provided an entertaining and challenging match for both sides.

Wins in the Hopman Cup and Division 3 showed the strength of squash in the Mornington area, while Bendigo can be justifiably proud of their efforts to take home the Merle Sampson trophy in Division 2.

The Hopman Cup will return in 2019 for it's 46th edition, continuing the tradition of country squash in the big city.