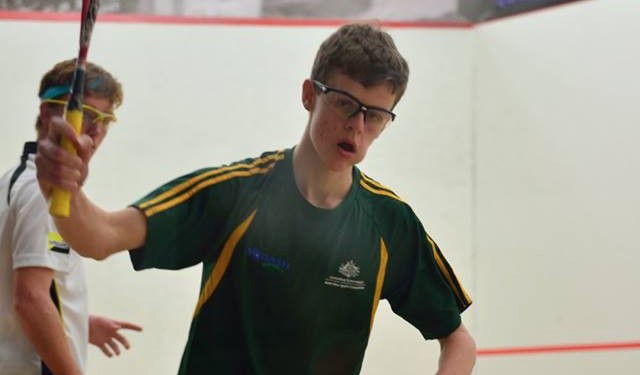 One of Australia’s top junior squash players will get his chance to mix it with established professional players at this week’s Victorian Open.

Queenslander Nick Calvert is ranked third in the national Under 19 squash rankings and will take part in this week’s Victorian Open at the Mulgrave Country Club as a wild card entry.

The 17-year-old is currently embarking on a busy month of tournaments, having taken part in last week’s South Australian Open before heading over to New Zealand to represent Australia at the World Junior Championships.

Despite the heavy workload, Calvert said he would embrace the challenge of taking on world class players over the course of the next fortnight.

"I haven't been able to train as much as I normally would as I'm travelling and playing matches, but I try to get down to the courts if I have a day or two off so that I can stay sharp,” Calvert said.

“I always look forward to playing against quality players. They expose my weaknesses so I know what I can go home and work on in training.

“I'll be playing the number one seed (Rex Hedrick in the first round) at the Victorian Open, so that will be a good experience.”

Expanding on the improvements made in his game, Calvert said he had taken a proactive approach to his training to ensure he was adequately prepared to compete at the professional level.

“Obviously professional squash is tougher than junior squash; professionals make so few errors that you have to work hard for every point, but I believe my game is becoming better and better the more I play open events,” Calvert explained.

“In the past 12 months I've been working on increasing the pace that I play and hitting the ball earlier, so that I can keep up with open players.

“Also in the past few months I've been doing a lot of technical work, which will hopefully make me more consistent.”

While firmly focused on the job at hand over the next month, Calvert said he still had his eye on a number of major events in the back half of 2017 that will help accelerate his development.

“After this block of tournaments I will go back to Brisbane and train for a few months in preparation for the Australian Junior Championships, and I'll also be playing some more PSA events around Australia,” Calvert said.

You can catch a host of local and international talent at this week's Victorian Open, with qualifying matches kicking off today at the Mulgrave Country Club.

For those who can’t make it to Mulgrave to view the action, the 2017 Victorian Open finals will once again will be streamed live and for free on Sunday July 16 thanks to My Sport Live.

Simply head to the live stream section of the Squash & Racquetball Victoria website, where you can subscribe for live stream updates prior to this year's event and view all the action from past Victorian Open events.