In form Kiwi sets her sights on Victorian Open 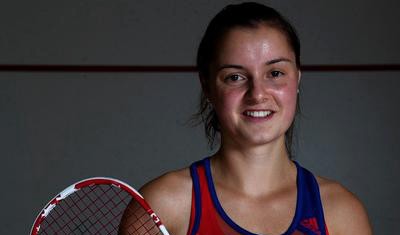 New Zealand’s Amanda Landers-Murphy is maintaining a measured approach to this year’s Victorian Open despite entering the Women’s Open event as one of the favourites.

The 26-year-old from Auckland is in some of the best form of her career after an impressive start to her PSA World Tour campaign in 2017.

Landers-Murphy enters the Victorian Open on the back of two big wins in New Zealand (North Shore Open in May and the Matamata Open in June) and multiple other finals appearances in her previous tournaments this year.

Despite her recent run of good form, Landers-Murphy is keeping expectations for the Victorian Open in check.

“Nothing really changes for me leading into this event,” the event fourth seed said.

“I’ve had a lot of squash and tournaments over the past few months, so I’ll just be working on tweaking any issues with my game and hopefully arrive in Melbourne playing some good squash.”

The world number 48 was last in Australia at the end of 2016, where she strung together an impressive streak of wins at the Queensland Open, the Mackay Open and the Cairns International.

While dismissive of whether those wins will provide any extra confidence this time around, Landers-Murphy said she had the inner belief to be successful in Australia once again.

“While I was very happy to get those wins last year, it was about nine months ago so they don’t really factor into my current form,” Landers-Murphy said.

“If I play my game well, I believe I’m capable of good results here.”

This tournament’s fourth seeding is the highest Landers-Murphy has been ranked at a Victorian Open since 2013, but she says it won’t have a bearing on her performance.

“There’s no added pressure for me - I think the top seed normally has the biggest target on their back so I’ll just show up and play as well as I can like everyone else,” Landers-Murphy said.

“You can never be sure how things are going to go with each event, I just want to be playing well.

“I know that if I do, I’ll give myself every opportunity to get the result I’m after.”